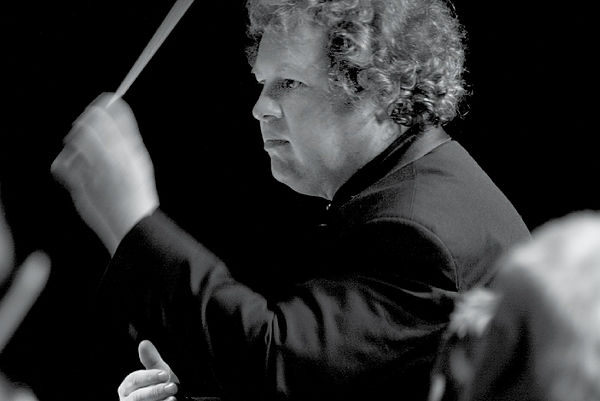 Named by Forum Magazine as one of the top ten faces to watch,   Kermit Poling is celebrating his 21st season as Music Director of the South Arkansas Symphony and his 26th season as Music Director of the  Shreveport Metropolitan Ballet.   He is in his 30th year as Associate Conductor of the Shreveport Symphony, an  orchestra where he also was Concertmaster for over 27 years.   He has produced the Shreveport Symphony’s broadcast series since 1987, having also produced radio programming for WBUR Boston and other public radio stations.   He serves as General Manager of the Red River Radio public radio network at LSUS having been appointed to the position in 2006.    In 2015 he became music director of the Marshall Symphony Orchestra in Texas.

As a conductor, Maestro Poling performs extensively throughout the United States and around the world..  He has been featured with the orchestras such as the Orchestra of the Province of Lecco, Italy,   the Orquesta Sinfónica del Estado de México,  the Guanajuato Symphony (Mexico), the  Moscow Chamber Orchestra and Moscow Ballet, the Oklahoma City Philharmonic,  Filharmonia Veneta, Shenzhen Symphony of China, University of Hartford and many other orchestras throughout his career.

Also a composer, Poling's most recent ballets include Peter Pan, premiered by the University of Hartford in 2014 and Beauty and the Beast, premiered by Ballet Oklahoma in 2014.   His work, No Sound of Trumpet nor Roll of Drum, was premiered in 2011, honoring the 150th anniversary of the start of the Civil War.  Last year, his score to the silent film Tarzan and for the documentary Tarzan:  Lord of the Louisiana Jungle won accolades across the country.  Past compositions include the ballets Snow White, Wizard of Oz, Aladdin, and Phantom of the Opera and several recent compositions commissioned by the Shreveport Summer Music Festival including Within the Orb of Glories Wearing and Visions of the Virgin.

Poling received the Outstanding Artist in Music Fellowship in 2000 from the State of Louisiana and twice received a Music Fellowship from the Shreveport Regional Arts Council.  His awards include scholarships to the Boston Conservatory of Music, the Cleveland Institute of Music and the Tanglewood Music Center, where he studied with Leonard Bernstein, Kurt Masur, Gustav Meier and Seiji Ozawa.  In 2005, Maestro Poling served as one of three international judges for China’s National Young Artists Competition with the China National Symphony in Beijing.  In 2012, he was awarded a career advancement award from the State of Louisiana.  In 1998 he was chosen by Oscar award winning artist William Joyce to compose the music for his stage adaptation of The Leafmen and the Brave Good Bugs.

Kermit Poling has been a featured conductor on NPR's Performance Today, the Arkansas Educational Television Network, the Red River Radio Network, WGBH Boston and has appeared as violinist on Louisiana Public Television and PBS in addition to numerous television and radio stations throughout the country.   He's been featured in Symphony Magazine, Louisiana Life and others.  He has a long history of recording and productions ranging from motion picture scores to commercials.   He has recorded for Coca-Cola, Mitsubishi, Sony and many other commercial clients as well as such artists as Kenny Rogers.    He has served on the faculty of Centenary College, Texarkana Community College and the Puerto Rico Conservatory of Music.   He has also served as artist in residence and taught master classes at the University of Delaware,  Kilgore College, Stephen F. Austin State University and others.   In 2011 Centaur Records released a CD of his newest Christmas arrangements performed by the West Edge String Quartet.  He was also featured as an expert on the reality TV show Baggage Battles in 2013 on the A&E network.